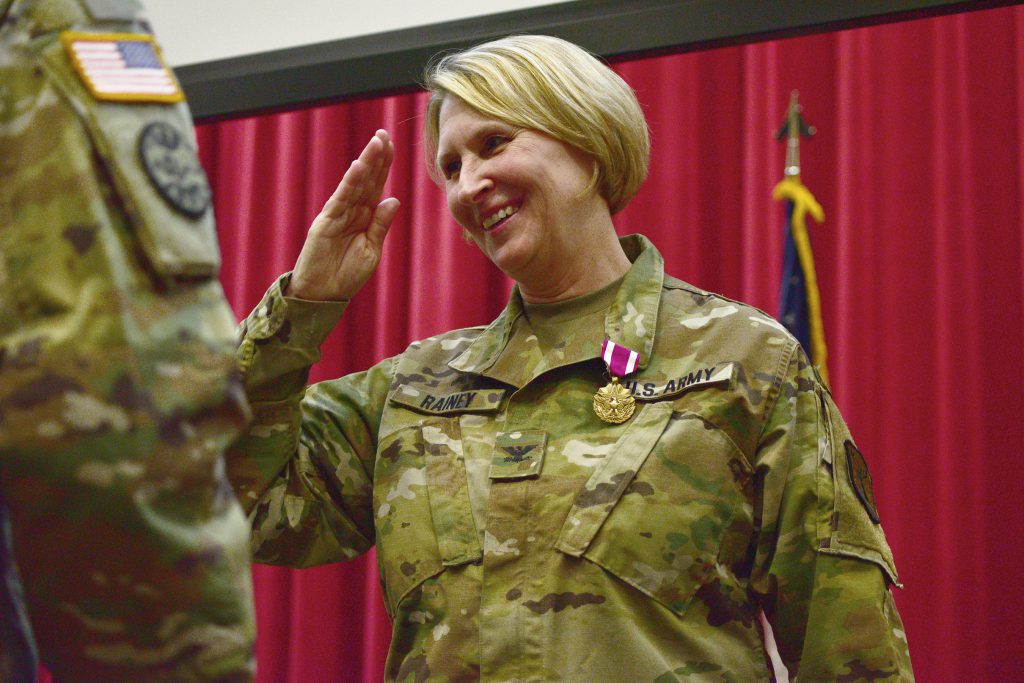 Col. Lora Rainey joined the military like her father and made it a goal to honor him by reaching the same rank he did while serving.

After 24 years in the Idaho Army National Guard and accomplishing her goal to earn the rank of colonel, Rainey retired on April 17 from the organization as its senior female officer and the first female state staff judge advocate.

“My promotion to colonel was really special to me,” said Rainey. “I wanted so badly to get to the point my father did. I know he’d be proud of me for all I’ve accomplished.”

Rainey was promoted to Colonel on Nov. 30, 2017 in a ceremony held at Gowen Field’s John W. Rainey Hall, a building dedicated to her father. He served on Gowen Field as a colonel and commander of the Army Reserve’s 321st Engineer Battalion and later passed away in 1985. Rainey asked to have her ceremony there to honor his memory.

“My father loved the Army deeply,” said Rainey. “I wanted to reconnect with him in that moment to thank him for instilling in me his love for the military and for setting me on the path years later that led me to where I am now.”

Before Rainey commissioned into the Idaho Army National Guard in 1997, she graduated law school from the University of San Diego in 1994. After returning home, she was reminded of the Guard’s opportunities and reflected back to her father’s love for serving.

“After law school I heard about a judge who had been a JAG officer on Gowen Field,” said Rainey. “He talked about the Guard being an incredible opportunity and a perfect supplement to a civilian career. It was a combination of those stories and remembering my father’s love for the military that made me look into the organization myself.”

After joining, Rainey said she appreciated having the ability to focus on one area of the law in her civilian career and another more varied one in her military career.

“In my civilian practice I only do one type of law and that’s terrific because it allows me to be a true expert in that field,” she said. “With the military, there are so many areas of law you need to address like military justice, fiscal law, the law of war or the law of armed conflict. It’s really exciting and I’ll miss that multifaceted approach you get to take as a JAG officer.”

As the state judge advocate, Rainey advised the Idaho’s command staff on legal matters and oversaw all legal services provided within the organization. As a JAG officer, Rainey counseled and represented service members at all levels concerning legal matters pertaining to themselves, their families and the organization.

“As I reflect on my career, I can say confidently that both of those jobs were instrumental to the organization. I got to help troops meet goals, military families make positive strides and assist commanders make sound legal decisions.”

The trial defense service provides legal representation to service members while enabling JAG personnel to advocate for their clients in an objective and independent manner, Rainey said. She first implemented the program after a National Guard directive in 2000, by educating commanders on the new service and emplacing reporting procedures.

“Once JAG is put into the trial defense slot, they have a completely different chain of command outside the Idaho Guard,” she said. “The great thing about that is it bolsters our ability to adequately and effectively represent troops with more independent representation and less conflicts of interests.”

Being able to advocate for her clients is what Rainey enjoys most about her career, she said.

She first decided to become a lawyer while spending a year in Washington, D.C. working for the U.S. Department of Veterans Affairs. It was the year after she graduated from the University of Redlands in California with a bachelor degree in political science and economics.

“Working with attorneys and being around so many legal issues there pushed me toward law,” said Rainey. “I realized how many employment opportunities there were within the field and that’s when I decided to apply for law school.”

While she has enjoyed both a military and civilian career, Rainey has also dedicated almost 30 years to volunteering within the community. She has served on the Idaho State Bar’s Volunteer Lawyers Program and Fee Arbitration Program, Ada County Youth Court, and on boards for both the Idaho Legal Aid Services and Anser Public Charter School.

In 2007, Rainey was honored with the Idaho State Bar’s annual Denise O’Donnell Day Pro Bono Award for donating extraordinary time and effort to help clients who were unable to pay for services. She was later selected by Idaho Women Lawyers to receive its Bertha Stull Green Award in 2018, which honors women within the legal community who demonstrate commitment to their community and public service.

Upon receiving her certificate of retirement from the U.S. Armed Forces and the governor of Idaho, Rainey was also honored with the Meritorious Service Medal for her dedication to service in the Idaho Army National Guard.

“It’s bittersweet,” she said. “The Guard has been such an integral part of my life. I will miss working with the troops and the incredible group of JAG professionals I’ve been privileged to know.”