Leadership addresses Airmen before they deploy to Southwest Asia Brigadier General Robinson’s military career began in 1996. He is a qualified Logistics and Engineer Officer. His key leader roles have included Commander of C/116th Engineer Battalion, Commander of the 145th Brigade Support Battalion, and Garrison Commander of the Installation Support Unit – Idaho. General Robinson has deployed in support of Operation Iraqi Freedom in 2004 and in support of Operation New Dawn in 2010. He is a graduate of the United States Army War College, as well as the Joint and Combined Warfighting School. As the Director of the Joint Staff he is responsible to The Adjutant General to prepare the Idaho National Guard to effectively respond to contingency operations in a federal or state emergency. General Robinson also serves as the designated Dual Status Commander, Joint Forces Headquarters-Idaho. He has oversight responsibilities for the joint staff, as well as, the Counter Drug Taskforce, the State Partnership Program, the 101st Civil Support Team, and other fulltime joint activities. He advises The Adjutant General and the Idaho Office of Emergency Management Director on all issues and policies relating to Defense Support to Civil Authorities – National Guard Civil Support. 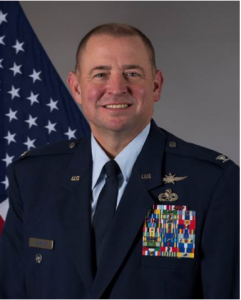 
Colonel Britt C. Vanshur is the Chief of the Joint Staff, Joint Forces Headquarters, Idaho National Guard. He serves as the full time principal advisor to the Adjutant General, the Director of the Joint Staff and the Idaho Office of Emergency Management on a broad range of joint military and domestic operations matters concerning the Department of Defense, the Departments of the Air and Army National Guard, and the Idaho Military Division. Additionally, he directs the State Partnership Program with the Kingdom of Cambodia, 101st WMD/Civil Support Team and Idaho National Guard Counter Drug operations.