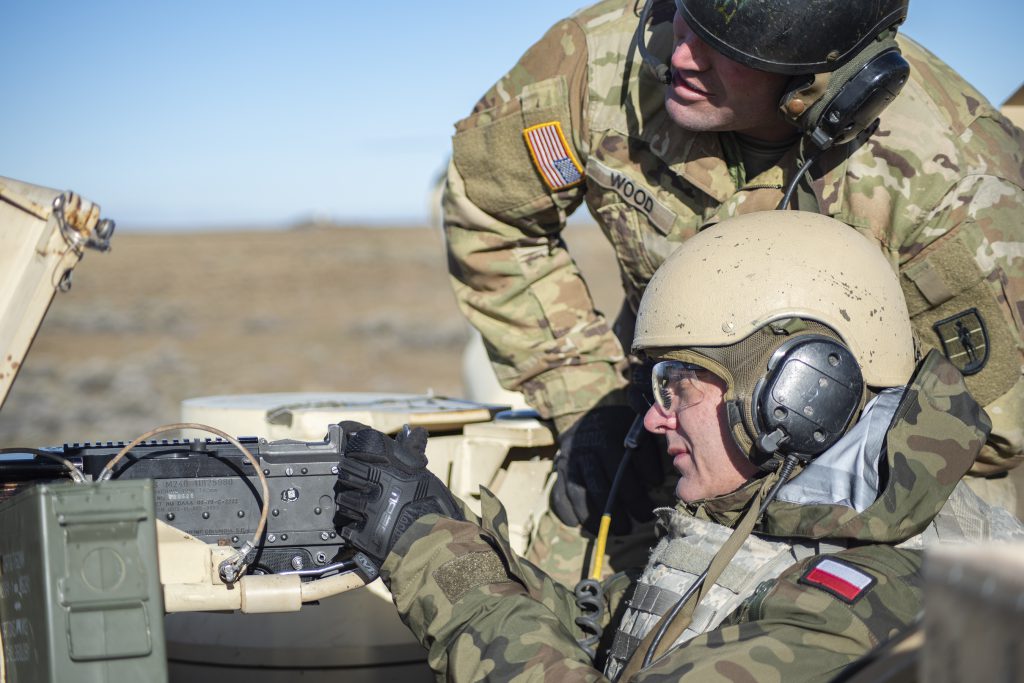 The Polish military—a U.S. ally, NATO member and official state partner of the Illinois National Guard—recently requested to purchase a fleet of M1A2 SEPv3 tanks and is working through the State Department and the Department of Defense to identify opportunities to partner in armor crew member training.

“The 1st of the 204th Armored Training Battalion is the only National Guard battalion that teaches a full catalog of armored training courses,” said Maj. Noah Siple, commander. “We are credentialed to be the premiere armored training battalion of the National Guard. Couple that with our Orchard Combat Training Center and our ranges for armor-specific training, there is really no better place to go to.”

The battalion has provided armored training since the 1980s and offers various 19D and 19K courses, including a tank commander’s course and advanced leadership course. A portion of the curriculum requires students to train in the 143,000-acre OCTC, one of the country’s largest and most versatile maneuver training sites, located approximately 25 miles south of Boise.

Soldiers attending the course from the Idaho, Kansas, Oregon and Texas National Guards had the unique opportunity to interface with the Polish soldiers before graduating on Nov.22.

The 27-day course is designed for enlisted members in the ranks of sergeant and staff sergeant. The platoon-level coursework provides training in the technical and tactical skills necessary to employ the M1A1 or M1A2 SEP tank against enemy positions during unified land operations.

“We integrated the Polish soldiers as much as possible into the training course to give them many of the same opportunities we give our U.S. students,” said Kaserman. “They already have a familiarity with tanks, which was helpful, however, the M1 is a different kind of tank with a lot of new things to learn.”

Throughout the course, Polish members took turns rotating through the driver, loader, gunner and commander crew stations; participated in tank simulators where they operated as both tank commander and gunner while engaging simulated targets; and conducted live-fire familiarization in the OCTC, where they fired different weapon systems of the tank, including an M240 and .50 caliber machine gun.

“They came here to experience first-hand training with the M1A2V2 Abrams tank and to understand how we train and construct courses for Soldiers becoming tankers in the U.S. military,” said Siple. “They also got to engage and build relationships with all elements of the Idaho Army National Guard.”

In November, senior leaders from the Polish Land Forces and Illinois National Guard visited Idaho to observe course training and what the 1-204th RTI has to offer. The visitors had the opportunity to tour some of the Idaho Army National Guard’s facilities, equipment and its premiere OCTC, in addition to engaging with Idaho’s leadership and armor experts.

The Illinois National Guard and Republic of Poland enjoy an enduring State Partnership Program focused on professional military education, crisis management and response as well as operational combat and deployment training. The partnership began in 1993 just after Poland emerged from behind the USSR’s Iron Curtain. Poland was accepted as a full NATO ally in 1999. Polish and Illinois National Guard soldiers co-deployed first to Iraq and then to Afghanistan from 2003 to 2020.

The Illinois National Guard does not operate or maintain the M1 tank and helped facilitate the co-training with Idaho.