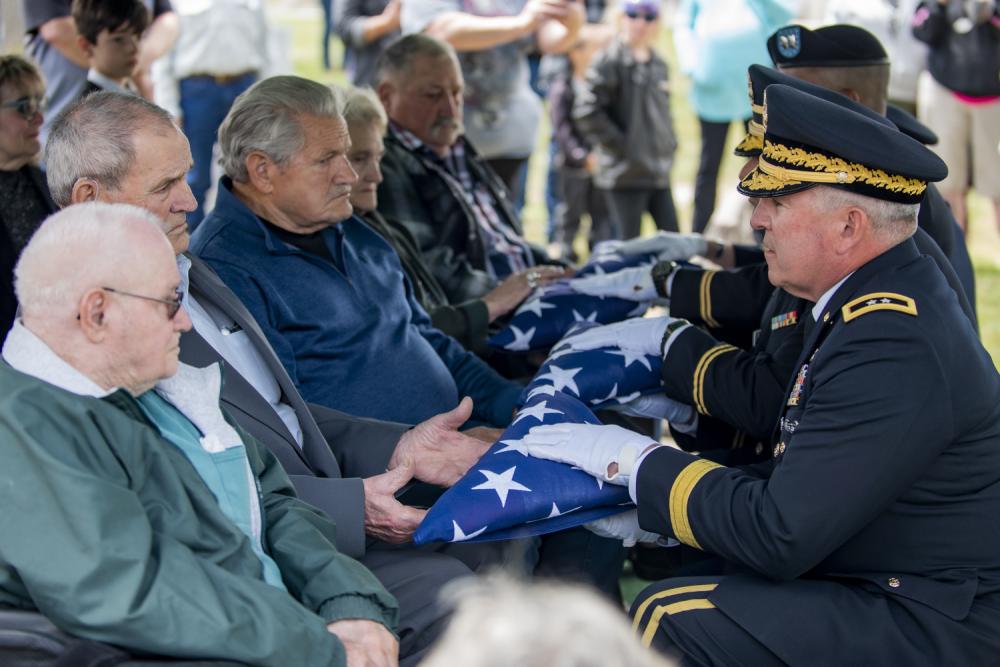 After 72 years, Pfc. Kenneth LeRoy Bridger was finally laid to rest and closure was given to his family during a full military honors graveside ceremony held in Twin Falls, Idaho, on May 21. Bridger was reported missing in action on Nov. 30, 1950, while serving alongside his fellow U.S. troops during the war against North Korea.

Bridger’s remains were identified on Jan. 26, 2022. Bridger was just 17 years old when he went missing and was a member of Company K, 3rd Battalion, 31st Infantry Regiment, 7th Infantry Division. He enlisted into the U.S. Army from Colville, Washington, but many of his remaining family resides in Idaho where he was laid to rest next to his brothers and his mother. Bridger’s four living siblings, along with their families, attended the private ceremony.

“Every U.S. service member is committed to never leave a fallen comrade behind. It is in our creed,” said Maj. Gen. Michael Garshak, Idaho’s adjutant general. “Although it has taken over 70 years to return Pfc. Bridger from the battle fields of Korea, it is comforting to me and to all who serve to know that we fight for a country that will never give up in keeping that promise. It is an immense honor to be a part of this ceremony and return Pfc. Bridger home to his final resting place with his family.”

Garshak presented Wilber Bridger, Pfc. Bridger’s brother and oldest surviving relative, the U.S. flag and the Purple Heart on his brother’s behalf. Bridger’s brothers Lynn and Halbert “Lee” Bridger along with his sister, Florence Fiscus, received the U.S. flag from the Idaho National Guard. The four siblings also received POW/MIA flags from the National League of the POW/MIA Families and local POW/MIA Awareness Associations in his honor.

Members of the Twin Falls community, lead by veterans, came together to honor and escort Bridger’s remains when they arrived to Idaho on May 17 in Twin Falls. According to the Defense POW/MIA Accounting Agency, Bridger was reported missing in action during the last night of his unit’s stand at the defensive perimeter south of the Pungnyuri Inlet on the east side of the Chosin Reservoir in North Korea.

Following an agreement between President Donald Trump and North Korean Supreme Leader Kim Jong-un, North Korea returned approximately 55 boxes containing the remains of U.S. service members on July 27, 2018. The remains were taken to Joint Base Pearl Harbor-Hickam, Hawaii, and entered into the DPAA laboratory for identification. One of the 55 boxes contained Bridger’s remains.

According to the DPAA, more than 7,600 Americans are still unaccounted for from the Korean War. Bridger’s name is recorded on the American Battle Monuments Commission’s Courts of the Missing at the National Memorial Cemetery of the Pacific in Honolulu, along with others who are still missing from the Korean War. A rosette will be placed next to his name to indicate he has been accounted for.