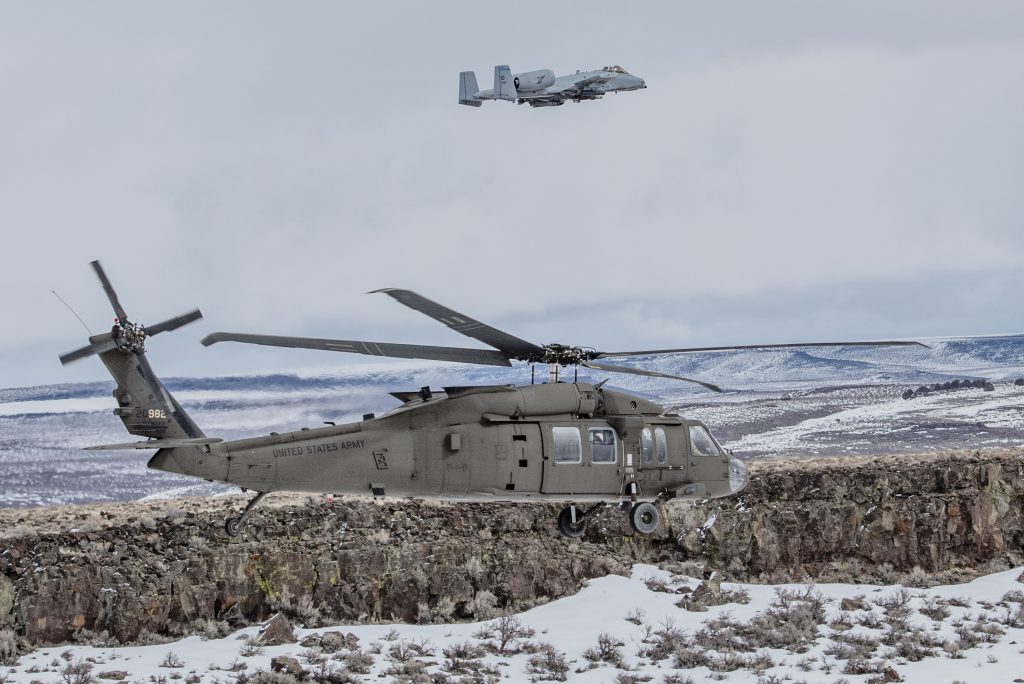 “Any opportunity to integrate the Army and Air missions in a joint training capacity is beneficial to both units,” said 1st Lt. Kate Smith, a mission planner for the Idaho Army National Guard’s Army Aviation Support Facility. “Because our missions can overlay in-country and in combat, anytime we have that ability to work together and integrate our systems, the training only helps our operations to be more seamless when it comes to the real-world missions.”

Airframes such as the UH-60 Black Hawk require A-10 Thunderbolts or other fighter jets to escort them in CSAR missions during combat operations because Black Hawks are a transport aircraft designed to extract or recover personnel and do not have the capacity to carry heavy weapons.

After the A-10’s ensure the safety of the extraction point, the Black Hawks can approach the extraction site and utilize their hoist rescue equipment or land on the ground to recover personnel. The A-10s continue to provide air-to-ground support while circling the area. After the personnel have been recovered, the A-10s escort the helicopters until they are out of enemy contact.

“Having the Idaho Army National Guard assets readily available to allow realistic training scenarios for our fighter pilots is a huge benefit that we absolutely have to capitalize on when and where we can,” said Col. Chad Kornberg, 124th Fighter Wing commander. “The combination of airspace, threat simulation and air assets that we have in Idaho enable some of the most premier training opportunities in the nation.”

Because the Idaho National Guard’s aviation assets are co-located on Gowen Field, units are routinely able to conduct training together to increases its interoperability working with other services while conducting enhanced training that may not otherwise be available.

“Although the Idaho Army and Air National Guard have already been successfully working together for years, it is a strategic goal to amp up our joint training. We want to integrate with our assets as much as we possibly can going forward,” said Smith.