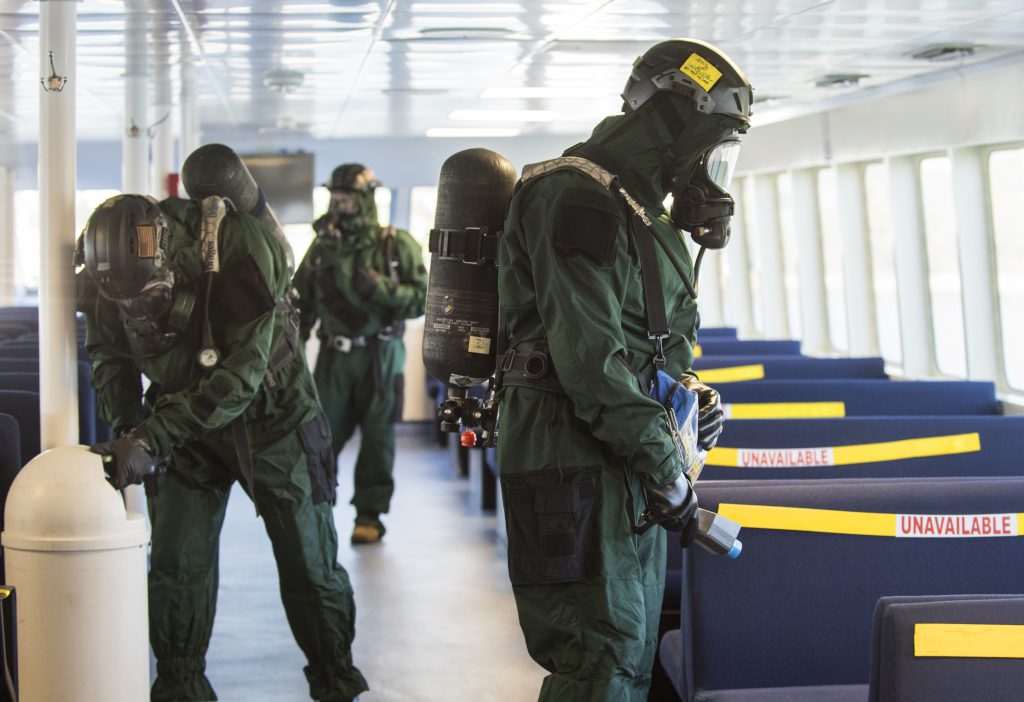 “This exercise gives us valuable training in our ability to respond to a chemical, biological, radiological or nuclear event,” said Lt. Col. Christina Taylor, commander of the 101st CST. “We have taken significant actions to ensure the 22 Soldiers and Airmen of the CST have the opportunity to continue to refine their skills in collective training exercises such as BAYEX.”

To initiate the exercise, biologically actionable results were simulated inside an abandoned military facility and a transit boat transporting people around the San Francisco Bay Area. The hazardous agent triggered phase one sampling, which resulted in federal agencies requesting support from the National Guard’s civil support teams. Civil support teams work closely with law enforcement and first responders, including the FBI, Department of Homeland Security and explosive ordnance disposal teams.

“It is important for every state’s governors and the nation to know that in the event of a small or large-scale emergency, the CST units are designed to respond and support local and federal civilian agencies,” said Taylor.

“I truly enjoyed participating in this event,” said Staff Sgt. Troy McDonald, 101st CST survey team chief. “The exercise allowed our team to interact with other CST members and cross-train with each other, sharing best practices and procedures.”

Participating in large-scale exercises helps the 101st CST remain ready to respond to emergencies throughout Idaho and the nation. The unit supports civil authorities at domestic incident sites, which may involve areas affected by terrorism or natural disasters.

“It is vital to continue training for emergencies even as the global COVID-19 pandemic continues,” said Taylor. “It’s imperative that the Idaho National Guard civil support team remains trained and ready to respond at all times to our local community, as well as neighboring states, in the event of a large-scale real-world HAZMAT emergency.”