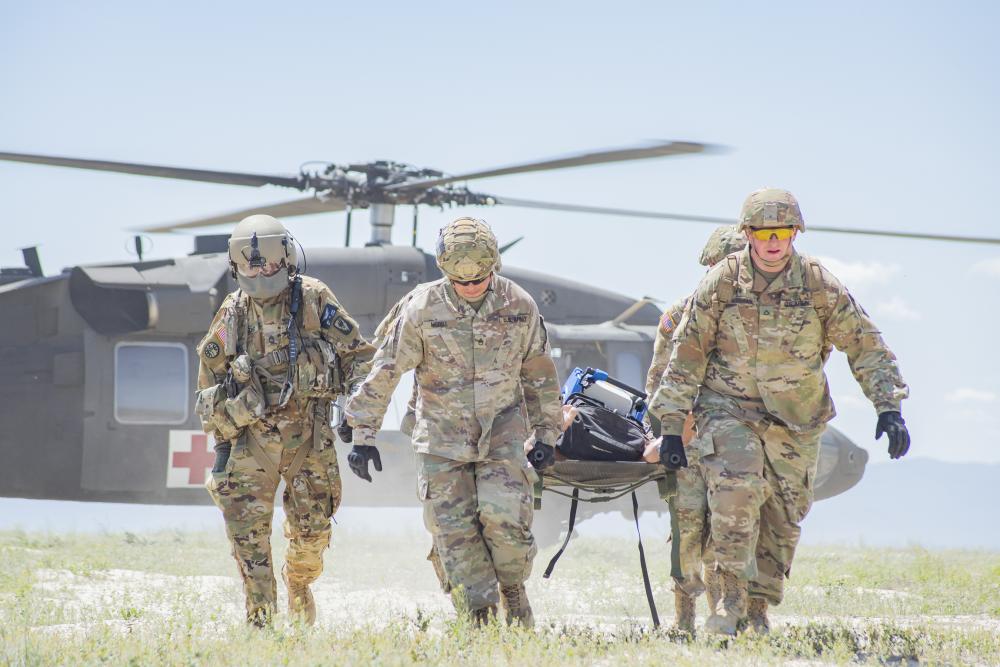 “I learned to stay calm and let the training I received in school take over,” said Spc. Regan Esplin, a 1-148th FAR medic. “I love being a medic, all the training that goes with it and everything about trauma medicine because it’s very immediate and the reward is you know how to save someone’s life. These kinds of experiences are crazy and not a lot of people get paid to treat casualties in a combat environment.”

For Esplin, the event was her first annual training with the battalion and a first opportunity to train with flight crews after graduating from the U.S. Army’s 68W Combat Medic Advanced Individual Training in 2021. During the event, she administered an IV and assisted other combat medics in stabilizing a patient.

During the training, combat medics had the opportunity to work with flight teams in loading patients into UH-60 Black Hawks, where they were evacuated from a point of injury to a Role 1 treatment facility. From there, medics offloaded patients from the aircraft and worked to evaluate, treat and stabilize them by administering tourniquets, IVs, ventilators and more prior to packaging them for transport to follow-on echelons of care.

“Training with medic and flight teams enable us to see how ready we are to respond to real-world situations and also make sure our newer medics get exposer to those situations in a tactical training environment first,” said Capt. David McDonald, a 1-148th FAR medical provider. “Depending on the situation, we may need to call in air medevac teams to transport our injured over long distances on the battlefield.”

In a tactical environment, the medical unit provides Role 1 care, which is the treatment a patient receives prior to surgical intervention, including self-aid, buddy-aid, tactical combat casualty care, tactical evacuation and medical evacuation, said McDonald.

When deployed in a tactical environment with the 116th Cavalry Brigade Combat Team, the battalion would coordinate the evacuation of patients to a Role 2 medical station, provided by the brigade’s Company Charlie, 145th Brigade Support Battalion. The Role 2 station offers surgeons, nurses, a pharmacy and short-term care.

1st Lt. Katherine Smith, executive officer with the medevac detachment, said its important combat medics receive training like this to become comfortable around aircraft in the likelihood they will have to work with them during a deployment. It’s equally important for members of her unit to train with combat medics so the two assets can ensure they understand each other’s operating procedures, she added.

“Different types of units that work together have to understand how the other operates,” said Smith. “In this case, the 1-148th combat medics need to understand how our pilots come into a landing zone and handoff a patient. What we need to know from them is at what point those medics need our assets to supplement that continuum of medical care.”