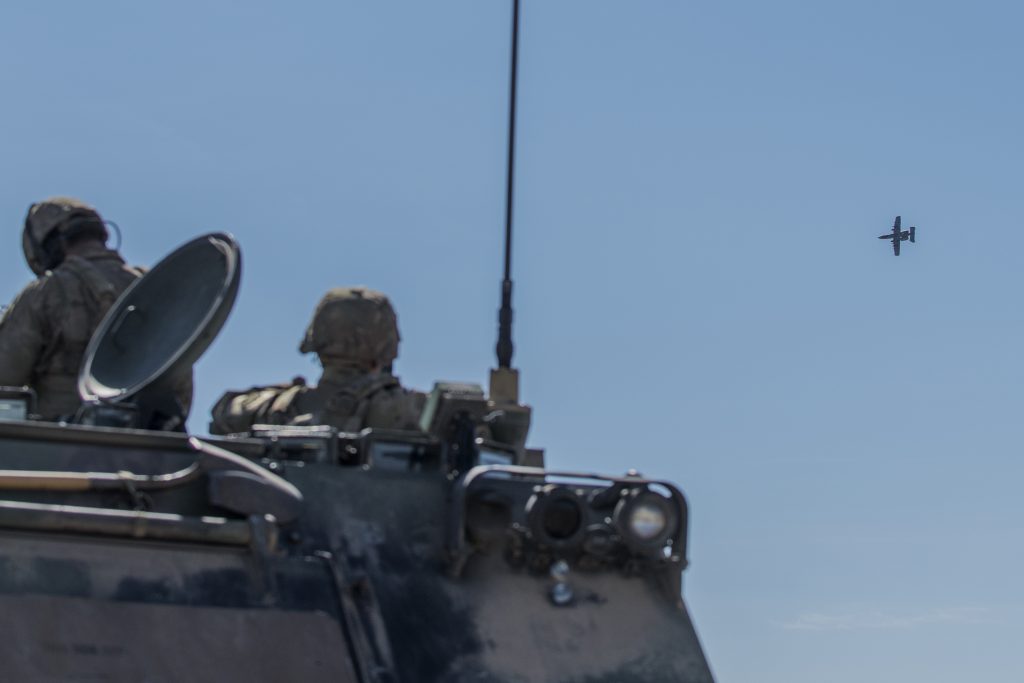 Idaho citizen-Soldiers and Airmen trained together May 18-19 to support a joint fire exercise that combined live mortars from the ground with close air support from above. Included were live bombs, missiles and combined effects munitions at Idaho’s premier training location, the Orchard Combat Training Center.

“Our battalion hasn’t had this level of training or this level of interoperability working with the Air Force before,” said Maj. John Gregory, 2-116 CAB operations officer. “We want to get to that level of proficiency working with each other, Army and Air, and provide ourselves the most lethal amount of force and mass effects in one space, at one time.”

Idaho’s A-10 Thunderbolt II aircraft dropped 500-pound bombs and other munitions in close air support for a combined effect after the ground forces engaged with the 120-millimeter self-propelled mortar explosives. This is the first time the A-10s dropped the live bombs at the OCTC as airpower support for the Idaho Army National Guard.

“Joint live-fire integration is the key to success on the battlefield of tomorrow,” said Brig. Gen. Timothy Donnellan, Assistant Adjutant General – Air. “The Soldiers and Airmen of the Idaho National Guard will continue to train together following the National Defense Strategy. The live-fire integration training conducted will give the ground commander the confidence they need to dominate the battlespace of the future aggressively.”

“We want to build on this training and make it a grander concept over the years to come,” said Capt. Jacob Bartlow, 2-116 CAB assistant operations officer. “We settled on a concept of the SEAD mission. This training turned out to be a great run and integrated all three units.”

The training will continue to become more robust each year. Bartlow plans to have several iterations of close air support from the A-10s in the future and possibly integrate F-15s from Mountain Home Air Force Base to support SEAD.

“In future joint fire exercises at the OCTC, we can include scouts to identify the enemy, bring in artillery, mortars and air defense to suppress the capabilities of the enemy so we can free the maneuver in another portion of the battlespace,” said Bartlow.

Located 18 miles south of Boise, Idaho’s OCTC has 143,000 acres of vast terrain and world-class ranges with a four-season climate, making it ideal for preparing units for combat in a challenging and realistic training environment.

“We have incredible training space here at the OCTC,” said Bartlow. “Ultimately, we envision Idaho as the National Guard’s premier location for joint fire integration.”