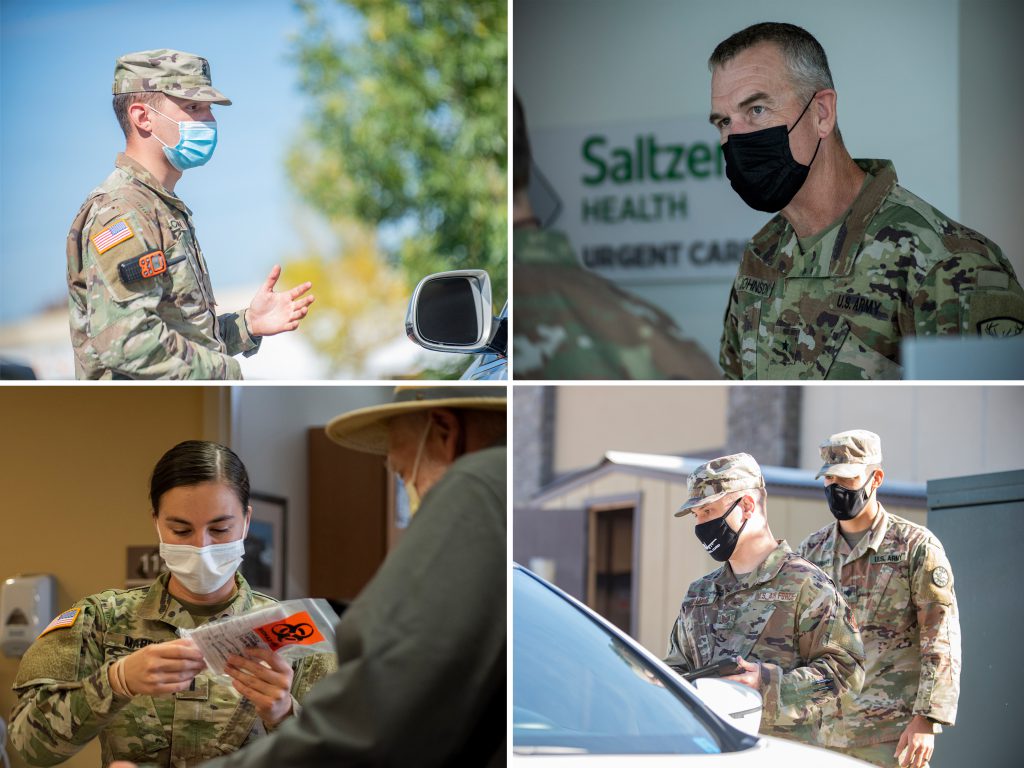 In September, after a second wave of COVID-19 cases spread across Idaho, Gov. Brad Little authorized the mobilization of up to 150 Idaho National Guard Soldiers and Airmen. He also requested additional federal support as a last-ditch effort to avoid activating a statewide crisis standards of care—a first in Idaho’s history.

“Joint Task Force – Idaho is helping free up civilian medical staff allowing them to focus on providing medical care during the ongoing surge in COVID-19 cases,” said Johnson. “Collectively, our Title 32 Idaho National Guardsmen and Title 10 active duty personnel are employed in direct support of our healthcare sector, making a difference in the lives of Idaho citizens every day.”

“It would be imprudent to pull our Idaho Guard medical personnel from their civilian capacities at these healthcare facilities just to activate and send them back in uniform to perform these same tasks,” said Vanshur. “They’re already making a positive impact on the health districts in their civilian capacity.”

This activation marks the second time since the beginning of the pandemic that Idaho National Guardsmen have deployed in response to COVID-19. In March 2020, the Idaho National Guard began mobilizing more than 400 citizen-Soldiers and Airmen as part of the organization’s first COVID-19 relief effort, named Task Force Agile Response.

During this second wave, while record numbers of COVID-19 cases overwhelmed northern Idaho, Kootenai Health requested assistance through the Idaho Office of Emergency Management as the hospital’s capability reached its limits, forcing it to implement emergency standards of care.

In response to this request, the Department of Defense, through U.S. Northern Command, allocated a U.S. Army medical response team. The 23-person MRT is augmenting Kootenai Health by providing doctors, nurses and respiratory therapists from various commands and locations, including Fort Carson, Colorado and Joint Base Lewis-McChord, Washington.

This is the first time in Idaho history that Title 32 and Title 10 personnel have mobilized under one joint task force creating the demand for a dual-status commander to effectively coordinate response efforts between both forces.

“Dual-status command effectively streamlines National Guard and active component efforts under a single commander in support of state and federal civil authorities,” said Johnson. “It ensures we all pull in the same direction to meet the needs—current and emerging—of the governor and his emergency management leadership.”

Idaho is one of several states to recently activate a dual-status commander for COVID-19 response. Other states include Alabama, Mississippi, Louisiana and Tennessee.

“Idaho’s joint task force has been highly successful on many fronts,” said Johnson. “Our Guardsmen and active duty counterparts have put their personal lives on hold to come together and answer the call of fellow citizens during this historic pandemic.”