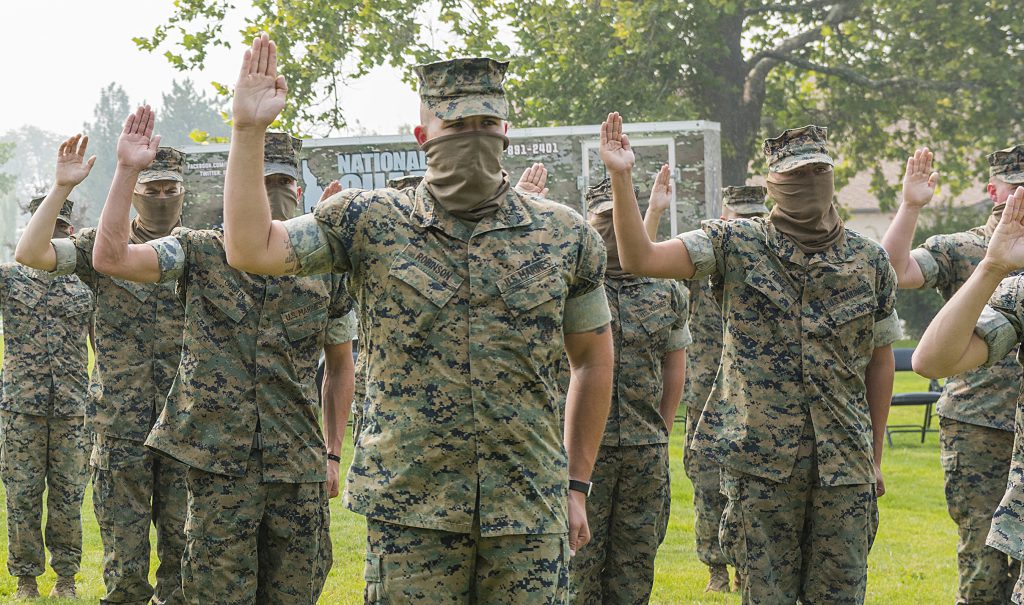 Today, more than three dozen former Marine Reservists enlisted into the Idaho Army National Guard. Idaho’s newest Citizen-Soldiers all served in Company C, 4th Tank Battalion, which was deactivated in August as the Marines look to divest its armor battalions.

“Marines make excellent Soldiers,” Brig. Gen. Farin Schwartz, commander of the Idaho Army National Guard said. “They each have the potential to make an immediate impact to their new unit and have already proven to be successful in the military.”

New recruits can take six to eighteen months to train before they can reach their assigned unit and once there, must continue to train and learn their new job before they can fully contribute to their unit’s mission. Most of the Marines who transferred into the National Guard will have similar positions when possible, Schwartz said.

Marine 1st Sgt. Craig Wilcox said more than a third of the company’s Marines transferred into the Idaho Army National Guard for one of two reasons: to continue to serve their country locally or to continue to work on or in tanks. Company C operated the M1A1 Abrams Main Battle Tank while the 116th Brigade Combat Team of the Idaho Army National Guard operates the updated M1A2 Sep v.

“I looked at all of my options and I knew I wanted to stay in Idaho because my family is here,” said Staff Sgt. Kyle Dycus, one of the Marines who transitioned into the Idaho Army National Guard. “Initially, I wanted to stay within the tank community but decided to look for a more real-world option for my future and I chose the information technology field. I am looking at this from a positive aspect and I am thankful for this new opportunity. Change can often be a good thing.”

The majority of the Marines who enlisted into the Idaho Army National Guard are tankers, maintainers and other support individuals.

“We tried to match their Marine skill sets to an Army military occupational specialty as much as possible,” Schwartz said. “And we’ll continue to pay them special attention for the foreseeable future to ensure their transition is as smooth as possible.”

Wilcox said Marine Reservists were given the option of transferring to a new job and unit in the Marine Reserve, to transfer to a new branch or join the Individual Ready Reserve. An additional 10 Marines joined National Guard units in other states.

The number of Marines to transition into the Idaho Army National Guard increases the total strength of the organization by more than a percent.

In 2019 the Marines began divesting its tanks and reducing its artillery cannon battalions to focus on developing light mobility options to get around island chains with the assistance of unmanned systems and mobile anti-ship missiles. The efforts are part of Marine Corps Commandant Gen. David Berger’s plan to modernize the corps to become a lighter and faster force.

The Marines also plan to reduce its number of infantry battalions from 24 to 21, artillery cannon batteries from 21 to five and amphibious vehicle companies from six to four.

Locally, Wilcox said that a small number of Marines will remain on Gowen Field to maintain the Marines’ connection to the Treasure Valley until a decision is made regarding future units being assigned to Gowen Field. In the meantime, Marines will continue to engage in community relations events, host their annual Toys for Tots program and conduct funerals and honors for Idaho’s Marine veterans.

Back to Newsroom
JOIN the Idaho Army National Guard